At Prestone UK, we recommend checking your coolant/antifreeze at least every two weeks, depending on the amount of driving you do. A functioning cooling system is crucial to the ongoing performance and health of your car’s engine, so it’s important to make sure the coolant/antifreeze level never drops below the minimum fill line marked on the reservoir.

Here, we answer some of the most common questions asked by those topping up coolant/antifreeze for the first time, including:

What does the cooling system do?

The cooling system is designed to remove heat from the engine and keep it running at the right temperature. The system comprises of a radiator, fan and hoses which run around the engine block, allowing the coolant/antifreeze to absorb heat from every part of the engine.

This heat is then dispelled in the radiator thanks to the volume of cold air coming in through the front grille and fan, and the liquid recirculated to absorb more heat. As the process is continuous, this ensures that the engine is always running at the correct temperature.

How do I identify my car’s coolant/antifreeze reservoir?

Your car’s coolant/antifreeze reservoir should be easy to identify by its coloured lid, with many cars having a yellow coolant/antifreeze cap. You’ll probably find that there’s a warning symbol on the cap too, which highlights the danger of unscrewing the cap when the engine is running or hot. 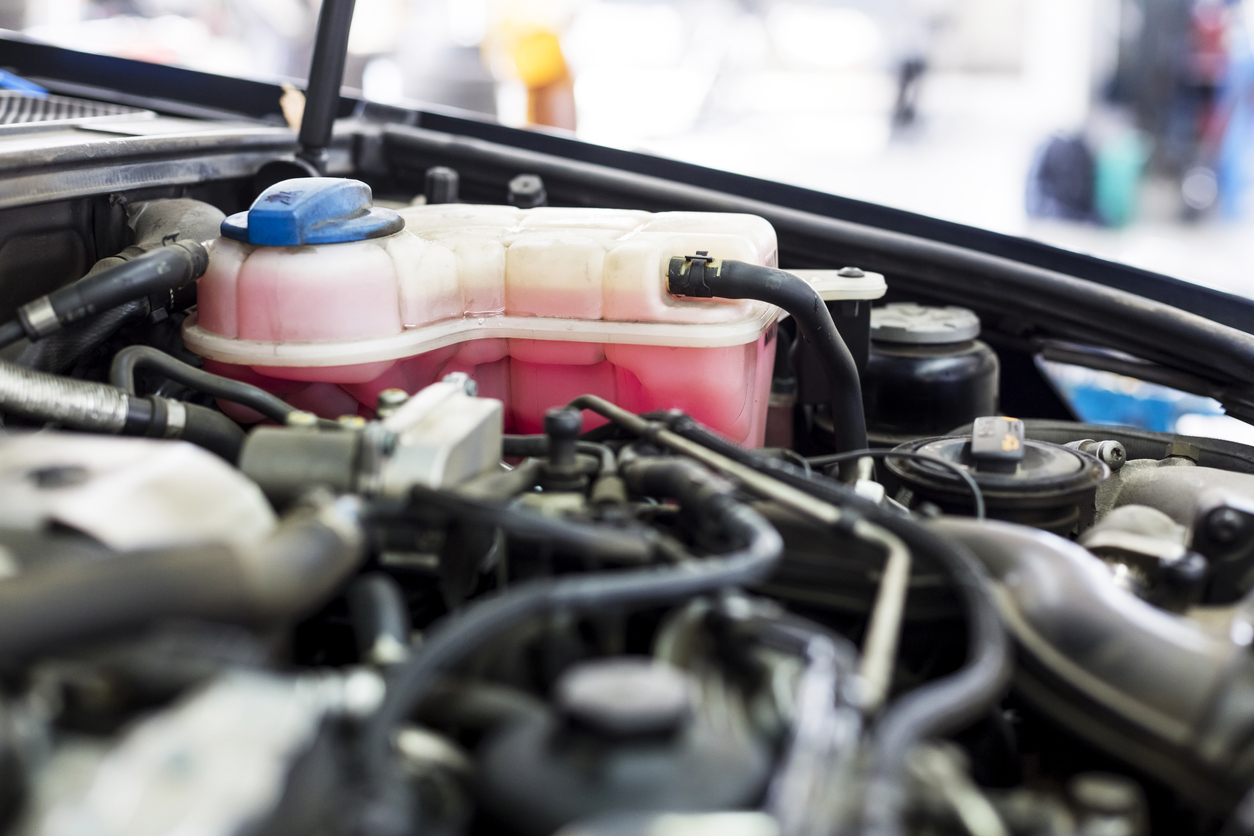 The reservoir itself is usually made of thick, semi-translucent white plastic, and you should be able to see the coloured coolant/antifreeze (often pink, yellow or green) through the side of the tank.

If you’re struggling to find your car’s coolant reservoir, the best thing to do is refer to the owner’s manual, which will have a diagram showing different parts and components under the bonnet. If you no longer have the manual, head online and visit forums dedicated to the make and model of your car — a fellow motorist should be able to point you in the direction of the coolant reservoir for your specific type of car.

How to check the level of the cooling system?

Checking your coolant/antifreeze level is a simple process and should only take a couple of minutes every couple of weeks.

To check your car’s coolant/antifreeze level, locate the reservoir and check the fluid against the minimum and maximum markers imprinted on the side. The colour of the coolant/antifreeze should make this easy to do, but you may need to give the bottle a wipe if dust and dirt are impeding your view.

Ideally, the level should always be closer (or directly on) to the ‘maximum’ mark, so if it’s dropped towards ‘minimum’, we’d recommend topping it up.

If the level is below the minimum line, top it up to the maximum line and monitor on a daily basis. How can I tell if my cooling system is leaking?

If you need to top up the coolant reservoir each time it’s checked, you could have a leak. Leaks can occur throughout the cooling system, and may cause serious problems, like overheating and engine damage, if left unattended. If you think a hole, split or crack may have formed within your vehicle’s cooling system, take it to a professional mechanic and they will be able to diagnose the problem for you.

How to top up your car’s coolant reservoir?

Topping up your car’s coolant reservoir is a straightforward process. Here’s a step-by-step guide on how to do it:

Can I add coolant/antifreeze to a hot car?

In instances where an engine has overheated, causing a breakdown, there may be a need to add fresh coolant/antifreeze to the cooling system. However, you should never add coolant/antifreeze when the engine is hot, and instead, wait for it to cool.

Why? Cooling systems are pressurised, and by removing the fill cap when the engine is hot you run the risk of a serious burn. Not only that, but the fill cap itself might be extremely hot to the touch, so for your own safety it’s important to wait until things have cooled off.

What to do if my car overheats?

Nothing is more nerve-wracking as a driver than seeing steam billowing from beneath the bonnet, especially when you’re sat in traffic. But what exactly should you do when the temperature gauge starts to climb towards the red, indicating that the engine is overheating? These five tips offer guidance on what to do when your car starts overheating while you’re driving.

If you notice the temperature gauge creep into the red, the first thing to do is switch off the air conditioning. A/C units put extra strain on the engine, causing it to generate more heat. Switching it off reduces the engine load, so things will cool down faster – an absolute essential in the summer.

Turning the heaters to full will transfer heat away from the engine and into the cabin, which may not be very comfortable for you, but the engine will thank you. If it’s the height of summer, open the windows so things don’t get too stuffy, and crank the vents on to full power for the best heat transference away from the hot engine bay.

Revving the engine might sound counterintuitive to helping it cool down, but doing this lightly will bring in more air and cool the radiator faster – provided the problem isn’t with the cooling fan, that is. Switch into neutral and rev the engine at about 1,500RPM to get the cooling fan going.

Stop-start traffic is about the worst situation to be in when your car is overheating. That’s because braking creates drag in the engine bay, warming things up rather than cooling them down. Setting off is also bad news for a hot engine, as the car is having to work against inertia and requires more power. Instead, try to keep the car rolling by reading traffic, and avoid too many stops and starts.

Sometimes the best thing to do when you notice a change in the temperature gauge is to pull over and wait for things to cool off. Driving with a hot engine can do more harm than good, so we’d always recommend allowing things to cool down before checking the coolant/antifreeze reservoir. If it’s empty, there could be a leak, and you’ll have to top it up to continue your journey. 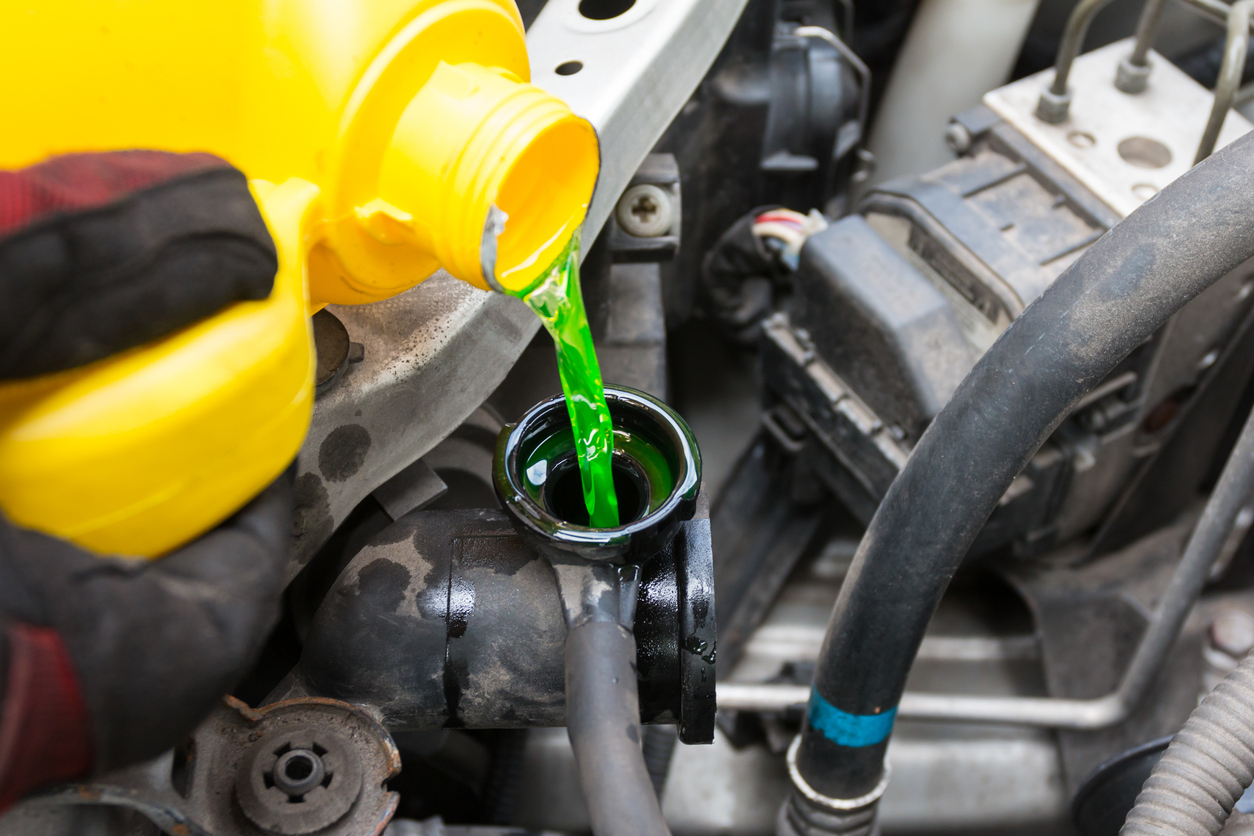 Can I put water in the car’s radiator?

Water can be added to the cooling system, but only as a last resort to help you get home if the engine is overheating. Water lacks the antifreeze and corrosion-inhibiting properties of specially developed coolant/antifreeze, so you shouldn’t drive with only water in the cooling system for longer than necessary – especially if you live in a cold climate where the water could freeze in the system, causing a whole range of problems.

How long does it take for a radiator to cool down?

This depends on how long you’ve been driving for and at what kind of speed. If you’ve only popped out on a short drive in town, the radiator won’t be all that hot at all, and should cool down within 20 to 30 minutes.

However, if you’ve been gunning it on the motorway, you can expect to wait around an hour for the radiator to cool down enough for it to be safe to handle. Obviously, these times will differ depending on the temperature outside, with radiators taking longer to cool in summer than winter.

If you need to replace your coolant completely, you can also use Prestone Coolant/Antifreeze for this. Read how to here.

All our products are tested in extremes to ensure they work for you every day. To find out more about Prestone, visit our homepage.