We’ve bought you a few interviews recently, including with “The Stig” and earlier this year one with Shaw Wilson from the Saab Owners Club. Talking to people from car clubs is a great way to find out more about specific makes and models, maybe helping you to discover a classic you’d like to own or give you inspiration for your own projects.

So this time we’re talking to Glenn Brackenridge of the Sunbeam Alpine Owners Club, a British car club with an international reach that pays homage tofor owners of Sunbeam Alpine sports cars, which were manufactured by the Rootes Group between 1959 and 1968. Recently, weWe chatted with Glenn Glenn Brackenridge of the SAOC about his love of classic cars and what drew him to get involved with the club – read our full Q&A with Glenn below. 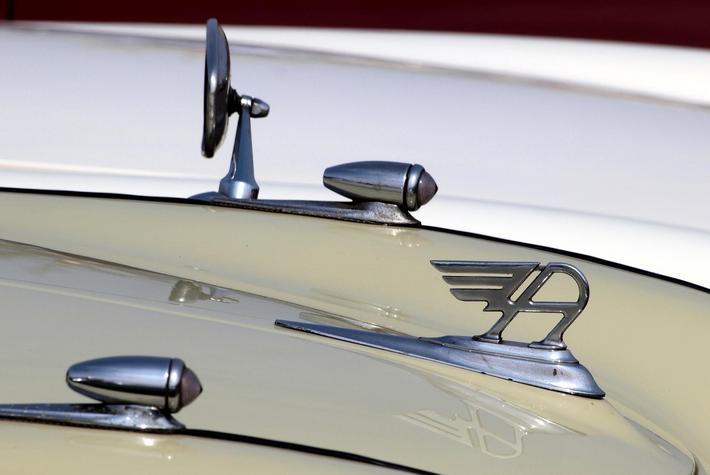 Hi Glenn, thanks for agreeing to chat with us. Firstly, could you tell us about your introduction to cars? What prompted your interest in classic cars in particular?

“I started driving in 1973, owning several 1960’s cars that are now considered classic or desirable. These included an Austin A35 van which I supercharged, an A40, a Vanden Plas 1100 with magnificent leather interior, a couple of Triumph Heralds, a TR4 and a Jaguar 240. My father also encouraged me with my cars because I now realise he was what we now call a “petrol head” having owned 3 Bentley’s, a Hotchkiss Anjou and a Lagonda Coupe in the 1950’s. After that he progressively owned less interesting cars because my mother discouraged any “flashness” and he was finally relegated to driving around in a Simca 1100. I always had an affection for all the cars of this era, not just the ones I had owned, and was pleased to re-ignite my classic car interest in 2009 when I bought my Harrington Le Mans, which is based on a Series II Sunbeam Alpine.”

How did you become involved in the Sunbeam Alpine Owners Club? And what drew you to Alpines in particular?

“Some of my friends owned MGBs but I wanted a car that was different so in the famously hot summer of 1976 I bought a Sunbeam Alpine mainly to be a bit different. I also needed a car large enough for my 6ft 5inch frame. I didn’t expect to fall in love with it, but that’s exactly what happened, and I had 3 Alpines over the next 3 years. I just couldn’t understand why it was regarded as un-desirable at the time. Even my MGB owning mates were surprised by it, both for comfort and power. Not long after buying it I saw an advert in one of the specialist car magazines for any interest in starting an Alpine club and I responded. I ended up being founding member number 008 of the SAOC and the initial editor of the club newsletter (type-written & photostat) for 2 years. On my return to the club in 2009 I returned to the role of Editor and produced another 50 or so editions in full 48-page CMYK colour – how things have changed!”

Could you tell us about some of the events held by Sunbeam Alpine Owners Club?

“The SAOC is mostly guided by the local areas and each of the 15 or so area reps will organize activities in his region. These might be co-ordinating attendance at shows like Tatton, Moffatt or Cranleigh, having monthly lunch meets at a suitable pub, or organizing “run-outs” to the Isle of Wight or even trips to Classic Le Mans. The main events organized by the club itself are a Spares Day, NEC show attendance, a National weekend meeting (Chester racecourse in 2018) and most recently the Silverstone Classic weekend.” What advice would you give to car enthusiasts looking to get more involved in their local owners’ clubs? Or, perhaps those thinking of starting a club in their area?

“It is worth noting that the SAOC, like most classic car clubs, is run by enthusiasts on a voluntary basis. We only cover limited costs for displaying at the NEC, for example, or for petrol when attending committee meetings. Running a club is time consuming business for all involved, especially with 700+ members. We are always looking for new members to take on roles within the club. Speaking as a recent ex-editor, although it was an honour to have produced another series of club magazines, I welcomed a younger editor taking over as the classic car world needs an infusion of younger owners/members so that club attitudes can keep pace with changing times.

I would suggest that new owners participate in the club Social Media and Forum pages, introduce themselves and ask questions to the old-stagers – soak up their experiences. It is the new lifeblood which will govern the future success of any classic car club. The SAOC is proud of its printed magazine and places great value on sending out a high quality product to its membership. New members frequently buy their cars already restored and do not have the same emotions as the older members who often built up their cars over many years so we need to have a wide appeal.

For members located in areas with too few Alpines to justify a dedicated Alpine meeting it is a good idea to join one of the many local “petrol heads” clubs where all cars are welcome. These members may have to go a little further on the occasions that they want to meet up with other Alpine owners. We reckon that only 20% of Alpine owners actually go to regular meetings.” 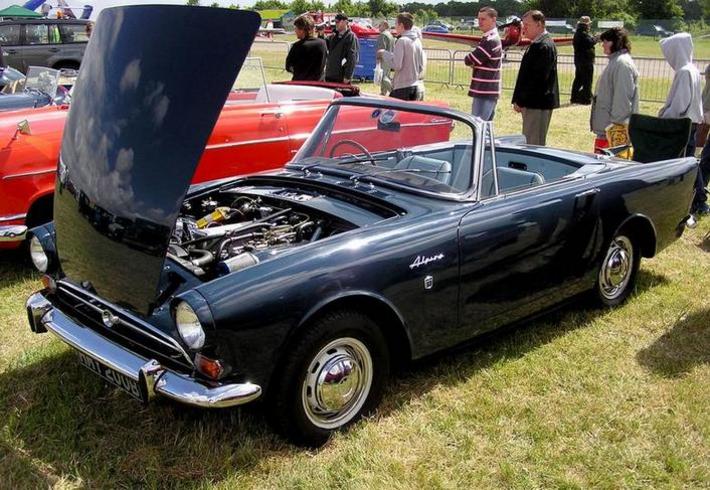 What do you enjoy most about vintage Sunbeam Alpines – driving them or maintaining them?

“Personally I prefer driving my Alpine. However my car was driven extremely hard in its previous ownership, completing over 40 serious UK and European rallies, and it requires constant maintenance and attention just to keep running. I focus on one major aspect each year, engine, axle, sills etc. This year it will be refurbishment of the headlights, bonnet and nose sections. As an old timer I now have the money to spend on buying the correct tools for each job and I probably do a better job in the calmness of my garage than I ever did in the 1970’s on the pavement outside my parents house. Also thank heavens for Ebay and suppliers who are remanufacturing essential spares. Where would we be without them?

It is true, however, that the SAOC accommodates everyone from the ultra-serious full concours restorer right through to the casual mechanic and ‘Sunday driver’. Anyone who is helping keep an Alpine on the road is equally welcome and we have a full range of owners at our meetings.”

If you had to choose, what would be your favourite car to own and why?

“I think I am fortunate in already owning my dream car, a Sunbeam Harrington Le Mans. My wife didn’t want me to buy an ordinary convertible Alpine in 2008/9 when we had no garage facilities – her Z3 occupied the only covered space – and British winters make life difficult for soft-top classic car ownership. The coupe style of the Harrington allowed it to survive two snowy winters before we finally built a garage to house both our cars. The Harrington is pretty unusual with only a handful running in the UK and it draws interest wherever it goes.

The Harrington also allows me to dabble in historic racing and rallying as it has a full rollover cage and fire extinguisher systems and even had a FIVA registration under the previous owners. Each year I try to upgrade the spec to accommodate the new MotorSportUK Blue Book specifications and do one or two events. What more could I ask for?”

Redex fuel additives are particularly effective when used in older engines, helping to clear deposits and improve performance. Have you ever used fuel additives as a means of getting more from an engine? Or would you consider it in the future?

“Additives were used with my car when it had its previous engine configuration due to the higher than normal compression and standard valve seats. I only stopped using an additive when the engine was reworked and hardened valve seats were added. However this has not stopped an occasional hiccup due to fuel irregularities. One of my races was cut short due to an accumulation of debris blocking the fuel filter. I put this down to the introduction of Ethanol dissolving part of the lining of the fuel tank. Without being a fuel scientist I am very concerned about the quality of fuel becoming less suitable for classic cars as time passes and companies like Redex have a major part to play with the availability of additives to help address the changes that are taking place with fuel quality. So yes, I think we are all quite open to the idea of returning to the use of additives as normal practice in the near future.” What advice would you give to someone looking to buy a vintage car? What should they look out for, and what maintenance tips can you offer to first-time owners?

“I should probably stay within the realm of the Sunbeam Alpine as this is my main experience. Like many cars of the 50’s and 60’s the Alpine design left plenty of opportunity for rust to take hold and 60 years of British winters will not have helped. So the first tip is to assess the structure of any Alpine you are thinking of buying. The good news is that even structural rust can be fixed using a rotisserie and decent welding skill, but the average mechanic will probably want to avoid these very rusty ones. Membership of the club is almost essential in order to get all the advice and experience from other owners, and the club maintains a list of all the suppliers it knows about.

Several new suppliers and Rootes-oriented workshops have appeared in the last few years. Thankfully almost anything can be found on Ebay and it is probably true to say that spares availability is better today than it was in the 1970’s. My favourite tip is to use the right tools for any job. There’s nothing worse than breaking a critical screw or stud, or rounding a bolt or nut because you tried to bodge it! The club even has specialist tools available for members, like rear hub pullers. If you are unsure of a particular task then ask on the forum or at a club meeting, someone else is sure to have already have carried out that job and be able to give advice. Lastly, don’t rush jobs. It’s better to do something slowly over time and get it right first time than have to disassemble something all over again just because you forgot a wire, bolt, adjustment etc.

It’s worth noting that this engagement with other owners to help keep your Alpine on the road is all part of the social benefit of being a club member. We all own the same type of car and the chances are we are all going to have a lot in common and this opens up the probability of future lasting friendships. So it’s not all about the car!”

We’d like to thank Glenn for chatting with us, and hope you’ve found hearing his tips, advice and insights useful.

To find out more about our range of innovative fuel additives, or for tips and guides on how to get the best performance from your engine, visit the Redex homepage.