Britain’s Highway Code is incredibly comprehensive, which explains why we have some of the safest roads in the world. And yet, within this 70-page document, there are lots of rules and regulations that seem outdated in the 21st century (some of which made our list of the world’s weirdest traffic laws). Stranger still are some of our road signs, which we think would baffle even the most experienced of motorists.

To prove just how strange some of our road signs are, here are a selection of the weirdest ones that feature in The Highway Code. We’ve also included a few foreign signs you might see when driving overseas this summer, just to keep you on your toes. You’d be forgiven for thinking the Highways Agency had missed something from this sign, but it actually means ‘no vehicles except pedal cycles being pushed by hand’ according to The Highway Code. That was an easy one to start us off. Did the Victorians leave this behind after the motorcar was invented? Actually, this sign is still in use today, and means ‘no horse-drawn vehicles’. So if you’re planning on arriving at your wedding in a horse and carriage, watch out for this rare road sign.

Horse-drawn Vehicles Likely to be in Road This sign might look similar to the one above, but it’s got quite a different meaning. It actually means ‘horse-drawn vehicles likely to be in road ahead’ — so watch out for slow moving traffic. This sign doesn’t mean you should watch out for exploding cars; it actually means ‘no cars carrying explosives’. While we can’t talk for the 1930s when The Highway Code was first written, we doubt many motorists need to worry about this sign today. This isn’t a hazard aimed at Focus, Fiesta and Mondeo drivers, but a warning of an upcoming ford — a shallow point in a river where vehicles can cross. This rare road sign means ‘slow moving military vehicles likely to be crossing in the road’, so don’t be alarmed if a Challenger 2 rolls up next to you at the lights. This might look like a motorbike jumping a car in a feat of motoring acrobatics, but it actually means ‘no motor vehicles’. You’ll likely see this near pedestrian streets in towns and cities.

Sharp Bends Ahead Where Traffic is Diverted This is a real rarity, and one that’s got a particularly niche meaning. It warns of ‘sharp bends ahead where traffic is diverted onto a temporary road for a short distance’. Chances are you’ll never see one in your driving life.

Vehicles May be Parked on the Verge While lots of us park on kerbs and verges to avoid clogging up the road, this sign — which means ‘vehicles may be parked on the verge or footway in marked bays’ — lets you do it without worrying if you’re breaking the law.

Water Course Alongside Road Ahead 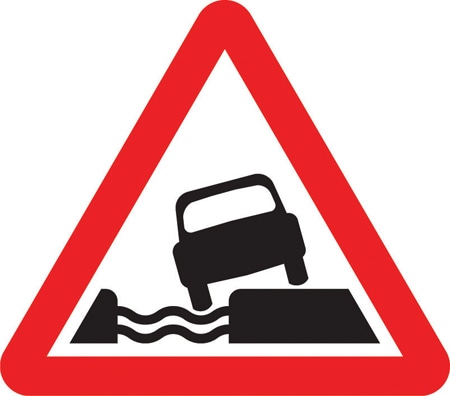 This sign literally means ‘water course alongside road ahead’, so if you see one, watch your speed and approach with caution.

Hitting the road on holiday this summer? Look out for these weird foreign road signs that might just leave you scratching your head. Spot this sign when driving around Europe, and you better be ready to hit the brakes. This sign is used in countries across the continent, and means ‘priority road ahead’. Spanish road signs are notoriously misleading, and given that’s where Brits do most of their overseas driving, perhaps it’s time to swat up on the Spanish Highway Code. This is just one of Spain’s baffling road signs, and it means ‘multi track level crossing ahead’.

Wherever you do your driving, you can count on Redex to get more MPG from a tank of fuel. Our petrol and diesel fuel additives help your engine run more efficiently, meaning more miles between the pumps. To find out more, visit the Redex homepage.