Aside from dashboard warning lights, smells are among the most prominent tell-tale signs that there could be something wrong with your car. From burning rubber to rotten eggs, cars produce a wide range of bad odours when there’s a fault, so you should always pay attention to how things smell when you first switch on the ignition and when you’re out on the road.

Just as with visual checks, being able to identify different smells and their associated problems can make it easier to diagnose faults with your car. Detecting these warning signs early could prevent major failures and breakdowns, potentially saving you money on pricey repair bills.

So, what smells can signal there’s something wrong with your car? Here we take a look at 10 odours you should never ignore.

Although car engines are designed to run at high temperatures, they should never emit a burning smell. If your engine smells of burning or smoke, there are two possible reasons for this: it’s overheating or there’s a problem with the oil.

Generally if it’s overheating, you’ll know about it because a warning light should appear on the dashboard. Pull over immediately if you suspect overheating, or you could cause severe damage to the engine.

If the oil pressure is low or there’s an oil leak, this could also result in a strong, smoky smell. As with overheating, you should see a dashboard warning light if there’s a fault with the oil system but paying attention to any burning smells could help you detect the problem and take action before it gets worse. Burning paper is a distinct smell, so this one should be easy to remember. If it suddenly smells like there’s a paper fire in your car’s cabin while you’re driving, there’s a good chance it’s coming from the clutch, the facings of which do contain paper.

Clutch smells are quite common and don’t always mean there’s a serious fault that needs repairing. Most often they’re caused when a driver ‘rides’ the clutch, which means half depressing the pedal. This causes the clutch to slip, overheating its facings and causing a paper burning smell.

While driving, try not to overuse the clutch pedal and get in the habit of moving your gear-changing foot away from it when you’re cruising; this helps prevent riding. If the paper burning smell doesn’t go away, you may need to replace the clutch facings and have the gear system inspected.

The smell of burning rubber may be most associated with tyres, but unless you’re driving like a Hollywood stuntman it’s rare that the tyres would produce such a smell. Instead, for everyday drivers, the odour is more likely coming from the engine bay – particularly from the belts and hoses.

Engines rely on a series of rubber belts and hoses for everyday driving. When one of these fails or becomes too tight, it can cause a burning rubber smell – a recognisable odour you should never ignore.

So unless you’ve been pulling doughnuts or accidentally set off from the traffic lights a little fast (both of which could cause the tyres to heat up), assume that the burning rubber smell is coming from the engine and get it checked as early as possible. 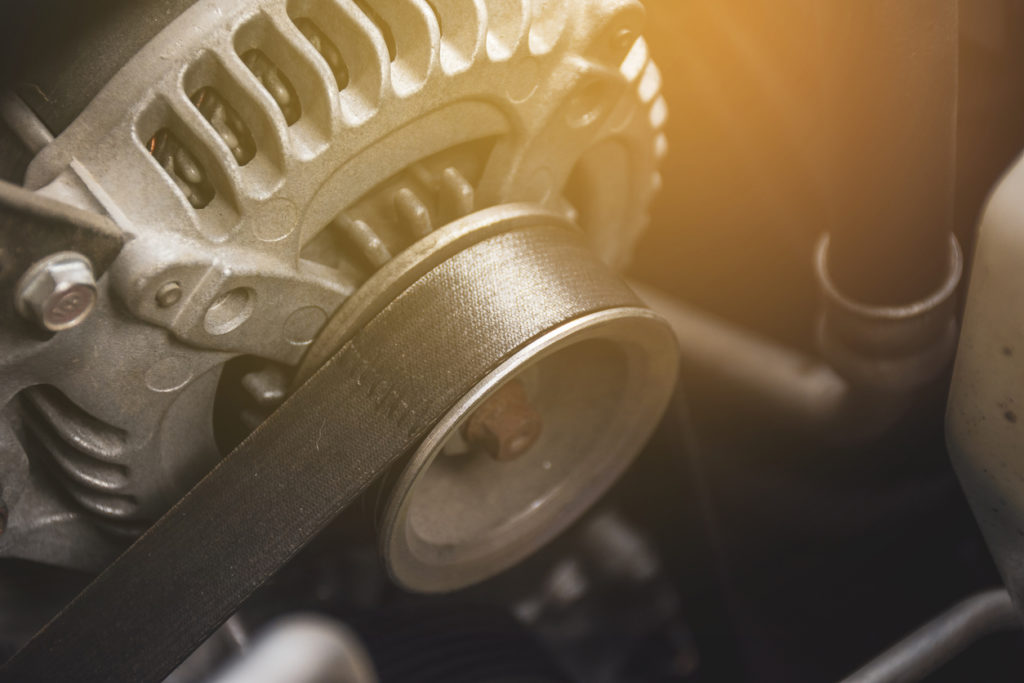 Before you go accusing your front-seat passenger, it’s worth remembering that that rotten egg smell could be coming from your car, more specifically from the catalytic converter.

These systems, located in the exhaust of some cars, are designed to convert hydrogen sulphide into sulphur dioxide. When they fail sulphur can escape, and that’s what produces the strong rotten eggs smell.

Granted, not many modern cars still have a catalytic converter, so it’s unlikely that you’ll ever experience the unpleasant odour when such a component fails. But if your car does have a cat and it’s fairly old, this is the part to check if you suddenly smell bad eggs in the cabin.

This unusual odour is one to look out for when your car is parked or when you’ve just switched on the ignition. If you notice a sweet, syrupy smell, there’s a good chance the cooling system is leaking, with coolant/antifreeze having escaped from the sealed system.

Coolant/antifreeze contains ethylene glycol, a chemical compound known for its sweet smell. When the cooling system develops a leak, the fluid can drain through the car’s undercarriage and drip on to the road, causing a sweet smell that can be surprisingly powerful and difficult to miss.

In the event of a leak, not only is it important to get the cooling system repaired to prevent overheating, but also to safeguard pets and wildlife against the threat of ingesting toxic coolant. Animals are attracted by the fluid’s sweet smell, so make sure you clean up any leaks that may have pooled under your car. When warmer weather arrives in spring, you might find yourself reaching for the air-conditioning switch for the first time in months. But wait – what’s that smell?

Over time, air-conditioning systems can get clogged up with dust, dirt and debris that can lead to bad odours in the cabin. Not only that, but moisture in the system can also cause the onset of mould and mildew – bad news for the air quality in your car.

The solution? Give your car a blast with Car Sanitiser, it’ll get rid of bad smells and bacteria. If there still seems to be problems with the air con, book your car in for an air-conditioning recharge at your local garage. As part of this affordable service, a mechanic will clear out and recharge the a/c system, making sure it’s working at its best.

If you notice fume-like smells while driving, particularly when you’re idling or driving slowly, pull over immediately and exit the car. The smell of fumes could indicate a leak in the exhaust, meaning dangerous levels of carbon monoxide could be entering the cabin.

Exhaust leaks are often caused by corrosion, with rust eating away at exposed pipework and eventually causing small holes or cracks. When this happens, fumes that are supposed to divert through the tailpipe instead linger under the car, rising through the floor and into the cabin.

If you notice the smell of fumes in the cabin and find a leak in the exhaust system, reach for Holts Gun Gum. Our innovative exhaust repairs system provides a permanent, DIY seal for leaking exhausts, helping you save money on pricey repair costs. 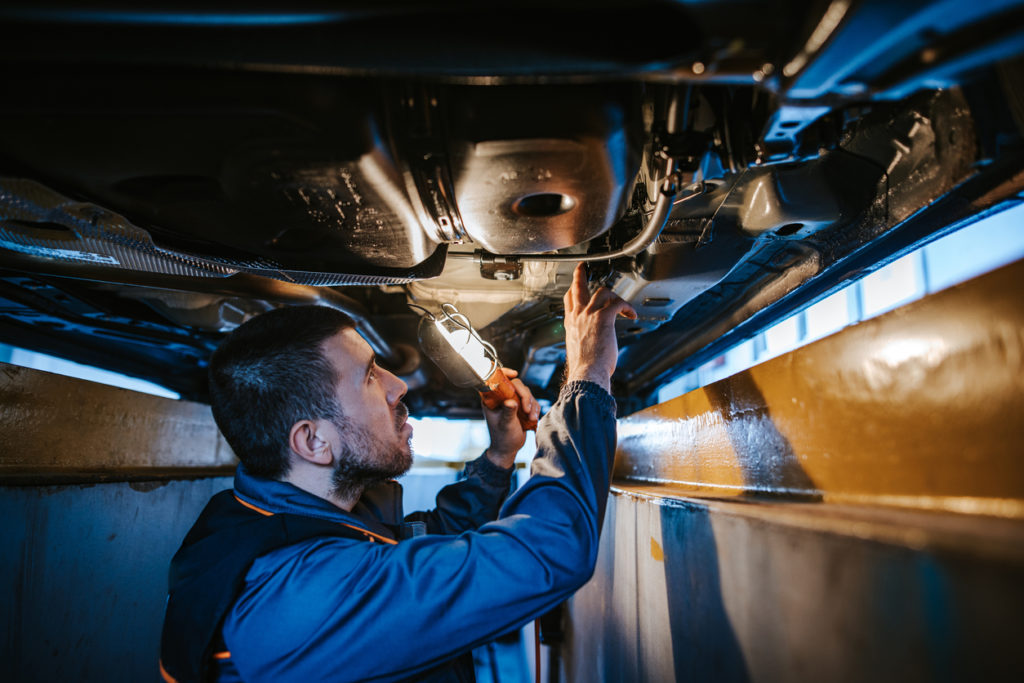 The acrid smell of burning plastic is hard to miss, so if you smell something similar while driving, pull over immediately to perform a few visual checks.

The first thing to check is the undercarriage. Sometimes litter from the road (like plastic bags) can get caught under your car and melt due to the heat of the exhaust. If this happens, try to safely remove as much of the material as possible before setting back off or you could risk a fire.

If the undercarriage is clear, pop the bonnet and check your car’s wiring, particularly around the battery. Battery or electrical problems can cause plastic casings to melt, so it’s important to check these and call a professional if you’re unsure.

One of the biggest red-flag odours you might smell while driving is fuel. If you get a whiff of petrol or diesel, either while your car is parked or when you’re on the move, there could be a fuel leak – a dangerous fault that you should never ignore.

Fuel leaks are rare on modern cars, and only really happen when the seals around the fuel lines perish over time. But if you notice a sudden change in fuel level or a strong smell of petrol or diesel, stop, switch off the ignition and call for roadside assistance.

Oddly enough, overheated brakes smell like burning hair or carpet, so that should help you diagnose brake trouble out on the road. Brakes can start to overheat with aggressive force or overuse, as is common when driving down a long steep hill.

The worrying thing about bad brake smells is that when they overheat they no longer work like they should. So if you smell burning hair when driving downhill, switch to a low gear and use engine braking to reduce the load on your brakes.

Often you may notice the distinct smell of brakes during normal driving. This could be because of a faulty handbrake that isn’t releasing properly or very worn brake pads. Either way if you notice a problem with your brakes, have them checked immediately.

So there you have it, 10 smells you can’t afford to ignore while driving. With routine maintenance, it’s easy to keep your car in good working order and avoid some of the problems mentioned in this guide. At Holts, our DIY car maintenance range is ideal for regular driveway servicing, so you can stay on top of day-to-day car care and repairs. For more information, visit the homepage. Searching for cheap, easy ways to repair and maintain your car? You’re not alone. Since the start of the cost-of-living crisis, there’s been an upswing in people looking for ways to carry out their own fixes – with DIY car repairs being one of the most popular means of saving money. Running a car is Chores. Love them or loathe them, they have to be done. What to Do When You Have a Puncture

Punctures are annoying, inconvenient, and potentially dangerous, not to mention a frustrating addition to your car’s maintenance bill. They’re something every driver potentially has to live with though, so it’s good to know what to do if you’re unlucky enough to experience one.