Car cooling systems rely on a series of hoses to carry coolant around the engine. Connecting the radiator to the expansion tank, the hoses extend to other components like the heater core and pump, ensuring that all parts of the engine receive a constant supply of coolant/antifreeze. 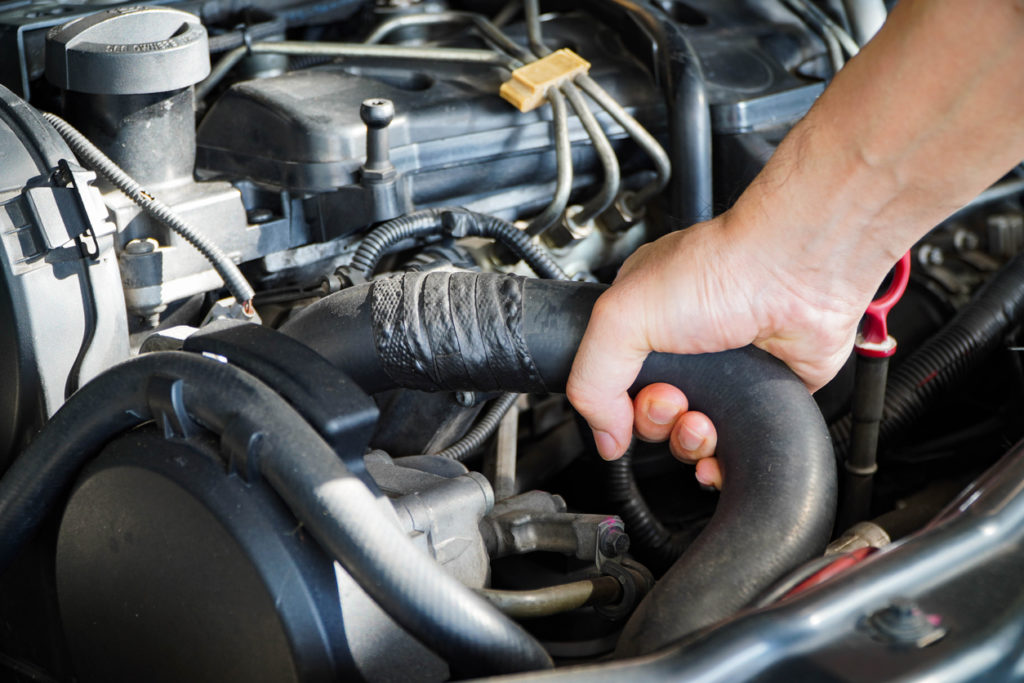 Often referred to as car radiator hoses, these channels comprise of three parts, including a central tube, a layer of reinforcement, and a cover. That might sound like adequate protection but remember that these hoses need to work in a demanding environment where they’re subjected to extreme temperatures and daily wear and tear.

Because of this, problems with car radiator hoses are not uncommon. In fact, if any component of your cooling system was to fail, chances are it would be a hose that went first.

So, what are the symptoms of a faulty radiator hose? How do you repair them? And how long do cooling system hoses typically last? In this guide, we’re covering everything you need to know about car radiator hoses. Use the links below to find what you need or read on for the full guide.

What are the Signs and Symptoms of a Bad Radiator Hose?

While modern car radiator hoses hold up much better against daily wear and extreme temperatures than earlier versions, they’re still prone to problems and may develop faults over time. So, to avoid the more serious issues that can come as a result of a faulty radiator hose (including engine overheating), it’s good to know how to spot the signs and symptoms of a bad cooling system hose. Coolant leaks are one of the most common symptoms of a faulty radiator hose. They happen when the hose either deteriorates due to heat or abrasive damage, or when there’s a problem with the clamps that connect the hose to another component in the engine.

If a radiator hose is leaking, there are a few signs to look for:

It’s important to establish the cause of the leak so you know how to fix the problem. For example, if there’s a hole or crack in the hose, you may be able to plug the leak with a product like Radweld. Alternatively, if it’s leaking due to a bad connection, it may be a case of replacing the clamp rather than fixing the hose.

Although radiator hoses are designed to hold up against high temperatures, they can degrade if they’re in contact with hot components or if the coolant is ill-maintained and not dissipating engine heat as it should. The signs of heat damage to look for on your car’s radiator hoses are a hardened finish, usually on one side of the pipe, which can lead to cracking and degradation if left untreated.

If your car’s radiator hoses are leaking because of a bad connection, it may be due to a process called electrochemical degradation (ECD). This happens through a process whereby metals within the cooling system create an electrical charge, which is passed through the system via the coolant.

The electrical charge caused by ECD can degrade radiator hoses over time, causing internal cracks which can weaken them from the inside out. These problems generally occur close to metal clamping points; a tell-tale sign is a hose that feels soft or sagging when you grip it. As engines have become smaller and more compact, radiator hoses are now tightly packed into the engine bay. This contributes to the demands placed on the hose material, making it more likely for extreme heat and abrasion to affect its long-term durability.

Abrasion damage is a common symptom of a faulty radiator hose. Caused when the hose rubs against other components, it can lead to holes and cracks forming on the outside of the pipe – meaning a replacement is almost always necessary.

To prevent this problem, it’s advisable to route the hoses in such a way that they’re not in contact with any hot or sharp components or edges. If you suspect radiator hose abrasion could be happening under your car’s bonnet, talk to a mechanic who will be able to recommend the best solution.

Car radiator hoses should last for at least five years in normal operating conditions, based on an average annual mileage of 12,000 miles. Of course, this depends on a range of factors, including:

Five years might not sound like a lot, but the good news is, cooling system hoses are easy and inexpensive to replace. And by changing hoses regularly, you can reduce the risk of more intensive problems that can affect the more complex and expensive components within the cooling system. How to Fix a Faulty Car Radiator Hose

Whether you can fix a car radiator hose depends on where and what the problem is. If it’s an internal issue, you may be able to fix the hose without replacing it. However, if it’s an external problem or a serious issue, you might not be able to avoid seeking a replacement.

For problems affecting the inside of the radiator hose, we have a handful of radiator repair products that are designed to fix and seal hoses and other components within the cooling system, including Radweld, Radweld Plus, and SEALit. Offering a pour-and-go solution, our radiator repair products provide a DIY way to stop leaks and permanently seal radiator hoses – great for when minor internal issues have caused your pipes to spring a leak.

In cases where hoses have been damaged by abrasion, extreme heat, oil contamination or ECD, you may need to replace the affected hose and make sure the problem is treated at source. For example, if abrasion is to blame, rerouting the pipe can prevent similar problems in the future. Similarly, if extreme heat is the cause, flushing the coolant/antifreeze and topping the system up with a premium product could help to improve the efficacy of heat dissipation in the engine.

Take a look at our range of radiator repair products for a quick and easy way to fix problems with your car’s cooling system, and for more help and advice check out the Holts blog. Painting bare metal can be tricky compared to painting other surfaces. For one, it requires lots of preparation to guarantee a flawless finish. As well as that, you need to make sure the bare metal is adequately protected, particularly for surfaces that are going to be exposed to moisture and dirt. That means that the Lots of things can cause scratches to appear in your car’s paintwork, whether it’s from a careless driver, loose pebbles chipping away at your paint or even a rogue keying here and there. If not dealt with quickly, deep scratches and chips which expose your car’s bare metal can rust within a few days and How to Deal with Peeling and Flaking Paint

Peeling, flaky paintwork occurs when one of the three layers coating the car’s bodywork (that’s primer, paint and clear coat) is damaged, often by a minor scratch or chip. If left untreated peeling paint will spread, leaving the bare metal bodywork exposed to moisture, oxidisation and everyday wear and tear — so it’s important to How to Prep a Car Before Painting: Cutting, Sanding, Priming and Picking the Right Paint

When it comes to painting a car, any automotive professional will tell you the same thing: it’s all in the preparation. Whether you’re repairing a chip or re-spraying the whole car, prepping the paintwork is just as important as applying the paint, and plays a huge part in the quality of the end result. There